Sunday February 16th the Windy City Poker Tour was back at Durbins in Tinley Park. A full Sunday of poker was in store hosted by Southwest Community Services. The noon deep stack ran with 54 entries and a prize pool valued at $2,180. 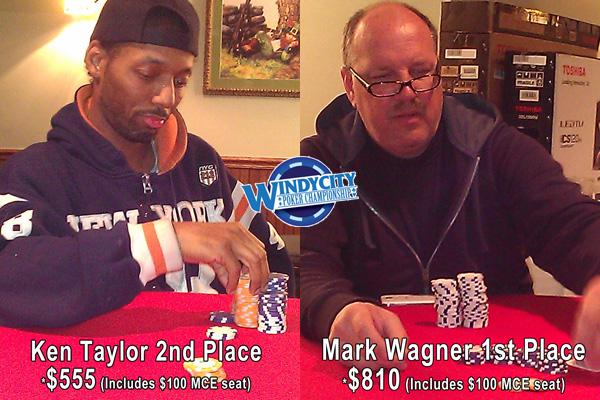 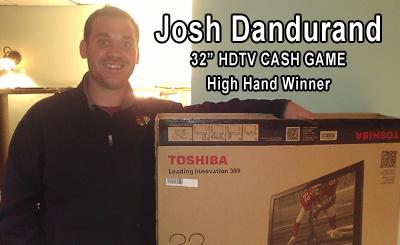 Because we are all about high value for you the player at these events, the hosting charity gave away a High Hand promotion of a 32" Toshiba HDTV valued at $300. Early in the promotion Michael Sabbia and James Snyder both shared A-Q off suit on a board that read K-K-4-K-A. Both players held the High Hand with Kings full of Aces. Not too long after that Josh Dandurand held an Ace in his hand while the board ran out K-K-7-K-K, giving him Quad Kings with an Ace; the new high hand of the night! It would hold strong the rest of the evening and Josh would take home a bonus prize just for participating in our event! Congratulations Josh!

The 7pm deep stack ran with Harry Mohebbi defeating Brian Ehman heads up for first place valued at $450 which included an added seat to the May Championship Event. This 7pm tournament gave a 96% return on their investment to the players participating.

More charity poker is in store Saturday March 1st at Ariel's Bar and Restauraunt in Tinley Park. 18401 N. Creek Dr. Tinley Park 60447 (Right next to the Wingate Hotel). For more information or to pre register contact Kirk at 708-935-2861 or This email address is being protected from spambots. You need JavaScript enabled to view it..

SuperBowl weekend full of Poker is in the books!

Mother Nature was aggressive this weekend as she dumped several inches of snow throughout the south burbs of Chicago. Luckily however that did not stop players from coming out to play in the charity events this weekend both in Tinley Park and Homer Glen Illinois.

On Saturday at Ariel’s Bar and Restaurant 27 players ($1,080 prize pool) ventured out in the cold and snow to play the noon 20,000 chip deep stack event.

Even though he took several bad beats and lost a few flips, John Castillo would walk away with first place valued at $550 which included a $100 seat to our May Championship Event. Second received $315, while third place went home with $215.

Not too long after the start of our noon tournament the $1/$2 cash game got up and running and went late into the night with some serious action! Players were hoping to win not only some extra money to cover this months heating bill, but they were also hoping to win a seat on TV to a special May televised cash game.

Players who came to play cash received entries into a drawing where one player would win a seat to the televised $2/$5/$10 game. When it was time for the drawing at 8pm…everyone huddled into the room and watched one of the charity volunteers from the American Legion Post 1170 select James Golding as our first player at the TV Cash game table! Congrats to James for winning the seat!

Dave “Fishy Fish” Backstrom finished on the money bubble…always a tough spot to finish in but lucky for him he held the high hand for that night’s promotion which included a $25 gift card to Best Buy.

Additionally Dave also had a bounty placed on his head by the hosting charity for another $25 Best Buy gift card. The eventual winner of the 7pm tournament Mike Laurenzana knocked out Dave and was the winner of the $25 best buy gift card.

SuperBowl Sunday got things started at noon with a low $3 max rake cash game. Players who came for the 2pm main event sat down to warm up their poker game and get ready for the 30,000 chip deep stack event.

There were several new players who came out for the $135 main event. The buy-in covered an all you can eat and drink buffet of pasta, pizza, chips, cookies, beef, beer and soda with $100 going to the prize pool. After several hours of playing an amazing structure Blue Shark Optics pro Matt Schwartz took first place in our SuperBowl poker event taking home $1,200* which includes a seat to our May Championship Event.

The evening capped off with a $1/$2 game that ran from the start of the SuperBowl game till 1:59 am. Players who played that day were entered into the second drawing for a seat to our televised $2/$5/$10 cash game. A volunteer from Shady Oaks Camp reached into the drawing bucket at 8pm and pulled out the name of Alex Crawford for the seat at the TV table. Congratulations to Alex!

All in all the weekend was full of action, fun, food, and winners! We look forward to next weekend’s event at the VFW in Tinley Park. See you on Saturday February 8th for another great day of poker!